It’s official!  Here are the books that made the shortlist for this year’s National Book Award in Fiction:

The year is 1975 and Reno—so-called because of the place of her birth—has come to New York intent on turning her fascination with motorcycles and speed into art. Her arrival coincides with an explosion of activity in the art world—artists have colonized a deserted and industrial SoHo, are staging actions in the East Village, and are blurring the line between life and art. Reno meets a group of dreamers and raconteurs who submit her to a sentimental education of sorts. Ardent, vulnerable, and bold, she begins an affair with an artist named Sandro Valera, the semi-estranged scion of an Italian tire and motorcycle empire. When they visit Sandro’s family home in Italy, Reno falls in with members of the radical movement that overtook Italy in the seventies. Betrayal sends her reeling into a clandestine undertow.

The Flamethrowers is an intensely engaging exploration of the mystique of the feminine, the fake, the terrorist. At its center is Kushner’s brilliantly realized protagonist, a young woman on the verge. Thrilling and fearless, this is a major American novel from a writer of spectacular talent and imagination.

Two brothers bound by tragedy; a fiercely brilliant woman haunted by her past; a country torn by revolution. A powerful new 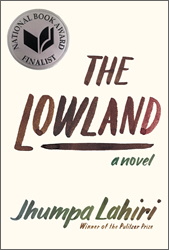 novel-set in both India and America-that explores the price of idealism and a love that can last long past death.

Growing up in Calcutta, born just fifteen months apart, Subhash and Udayan Mitra are inseparable brothers, one often mistaken for the other. But they are also opposites, with gravely different futures ahead of them. It is the 1960s, and Udayan-charismatic and impulsive-finds himself drawn to the Naxalite movement, a rebellion waged to eradicate inequity and poverty: he will give everything, risk all, for what he believes. Subhash, the dutiful son, does not share his brother’s political passion; he leaves home to pursue a life of scientific research in a quiet, coastal corner of America. But when Subhash learns what happened to his brother in the lowland outside their family’s home, he comes back to India, hoping to pick up the pieces of a shattered family, and to heal the wounds Udayan left behind-including those seared in the heart of his brother’s wife.

Suspenseful, sweeping, piercingly intimate, The Lowland expands the range of one of our most dazzling storytellers, seamlessly interweaving the historical and the personal across generations and geographies. This masterly novel of fate and will, exile and return, is a tour de force and an instant classic.

Bookmagnet Says: Throughout history and fiction, women have disguised themselves as men; it is quite uncommon, though, for a boy to disguise himself as a girl and continue the charade for decades. However, that is just what Little Onion does in James McBride’s brilliant and exhilarating novel The Good Lord Bird. McBride re-imagines the life of John Brown and his followers while simultaneously fashioning a remarkable and amusing character in the form of Little Onion. Through Little Onion’s eyes, McBride recreates Brown’s raid on Harper’s Ferry, one of the most crucial chapters in American history and one that helped spark the Civil War.

Little Onion’s voice resonates with authenticity and humor. In re-telling one of the most important events in American history, McBride creates a rousing romp of a story.

It is 2001 in New York City, in the lull between the collapse of the dot-com boom and the terrible events of September 11th. Silicon Alley is a ghost town, Web 1.0 is having adolescent angst, Google has yet to IPO, Microsoft is still considered the Evil Empire. There may not be quite as much money around as there was at the height of the tech bubble, but there’s no shortage of swindlers looking to grab a piece of what’s left.

Maxine Tarnow is running a nice little fraud investigation business on the Upper West Side, chasing down different kinds of small-scale con artists. She used to be legally certified but her license got pulled a while back, which has actually turned out to be a blessing because now she can follow her own code of ethics—carry a Beretta, do business with sleazebags, hack into people’s bank accounts—without having too much guilt about any of it. Otherwise, just your average working mom—two boys in elementary school, an off-and-on situation with her sort of semi-ex-husband Horst, life as normal as it ever gets in the neighborhood—till Maxine starts looking into the finances of a computer-security firm and its billionaire geek CEO, whereupon things begin rapidly to jam onto the subway and head downtown. She soon finds herself mixed up with a drug runner in an art deco motorboat, a professional nose obsessed with Hitler’s aftershave, a neoliberal enforcer with footwear issues, plus elements of the Russian mob and various bloggers, hackers, code monkeys, and entrepreneurs, some of whom begin to show up mysteriously dead. Foul play, of course.

With occasional excursions into the DeepWeb and out to Long Island, Thomas Pynchon, channeling his inner Jewish mother, brings us a historical romance of New York in the early days of the internet, not that distant in calendar time but galactically remote from where we’ve journeyed to since.

Will perpetrators be revealed, forget about brought to justice? Will Maxine have to take the handgun out of her purse? Will she and Horst get back together? Will Jerry Seinfeld make an unscheduled guest appearance? Will accounts secular and karmic be brought into balance?

Hey. Who wants to know?

George Saunders, one of our most important writers, is back with a masterful, deeply felt collection that takes his literary powers to a new level. In a recent interview, when asked how he saw the role of the writer, Saunders said: “To me, the writer’s main job is to make the story unscroll in such a way that the reader is snared-she’s right there, seeing things happen and caring about them. And if you dedicate yourself to this job, the meanings more or less take care of themselves.” In Tenth of December, the reader is always right there, and the meanings are beautiful and profound and abundant. The title story is an exquisite, moving account of the intersection, at a frozen lake in the woods, of a young misfit and a middle-aged cancer patient who goes there to commit suicide, only to end up saving the boy’s life. “Home” is the often funny, often poignant account of a soldier returning from the war. And “Victory Lap” is a taut, inventive story about the attempted abduction of a teenage girl. In all, Tenth of December is George Saunders at his absolute best, a collection of stories and characters that add up to something deep, irreducible, and uniquely American.

Which novel do you think will win America’s greatest literary prize this year?  The winner will be announced November 20.  I’d love to hear from you–who’s your favorite?