My most recent interview was with Michael Farris Smith, author of Rivers. 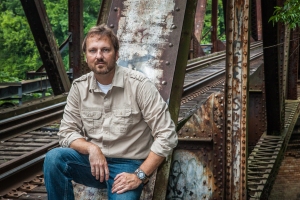 Thank you, Michael, for letting me ask you these questions.  Rivers left me chilled, gasping, and shaken to the core.  Did you always want to be a writer?

Not really. For a long time I didn’t know what I wanted to do so I was kind of a drifter. Change of scenery was something I really desired and needed so I didn’t stay in one place very long. But this restlessness took me to Europe for a few years and that’s when I began to read and that led me to the desire to write. I will say, though, that when it hit me at age 29, that’s all I wanted to do. Still is.

How would you describe Rivers?

What made you decide on the title?  Did you ever have any others in mind?

RIVERS wasn’t the original title. The original title had been used recently to my chagrin, but my agent and I were knocking around other ideas and when RIVERS was suggested, I thought it was perfect. It works on several different levels in the story. It’s strong, straightforward, Southern. Exactly what I wanted. 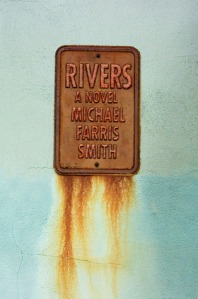 Michael, what was the impetus behind this novel?  How did you come up with the story?

There was no one thing, but several things came into play when I had the idea for RIVERS. Mississippi was still feeling, and is still feeling, the pangs of Katrina and something in me wanted to write a post-Katrina novel. But it wasn’t working and I was frustrated. At the same time I was also very much wanting to break from writing stories to writing novels and I wanted an idea that would, at the very least, picque interest. So I decided to quit banging my head against the wall with a Katrina story, and take the notion of hurricane destruction and the place and people that take the punishment and ramp it way, way up. What if a stream of hurricanes went on and on? What would it look like? What would we do? And then I started to work.

I want to talk more about Cohen.  He’s such an interesting man.  He’s a pragmatist, yet he stays in his home with the world practically coming apart around him.  He’s got a dog, a horse, and a whole lot of memories.  He’s haunted by the past.  Cohen’s a realist yet he also seems to be an idealist.  How did you come up with this character?  How easy or how difficult was it to make him so multi-layered and complex?  Is there any of you in Cohen?

I had an image of a man waking up in the middle of the night, on family land, on the Gulf Coast, after a big storm, and then he goes out to look around. And that’s really all I had. I just started to follow him, to see what he saw, to feel what he felt about what he was seeing. The layers eventually came, but I didn’t have a real game plan for Cohen other than I wanted to lay as much trouble on him as I possibly could and see how he would react. Turns out, he took a lot, and kept fighting.

I think there’s some of me in Cohen, like I guess there is in most all of my characters, but I don’t think there is much overlap. And least not consciously. He’s kind of a South Mississippi guy who grew up playing ball and riding around with a cooler of beer with his buddies and working with his hands, and that’s a pretty decent description of me.

Are there any plans on making a movie of this book?  I would love to see Matthew McConaughey as Cohen.

That’s a good suggestion. I’ll see if we can get him a copy.

Mariposa is another intriguing character and she also lets you talk about New Orleans and what happened there.  She’s also haunted.  How did you come up with the character of Mariposa?

Mariposa was so much fun to create because, like you said, she gave me the chance to use New Orleans and all the ghost stories and dark alleys of the French Quarter. I wanted some of the characters to be displaced, to have ended up in this situation by straight-up bad luck, and that’s how she came to be. I didn’t know when she was introduced limping along the side of the road that she would grow into the character that she grew into, but I’m glad she did.

How did Hurricane Katrina affect you and your friends and family?  Do you think Rivers would have ever been possible without Katrina?

I’m certain that there would have never been RIVERS without Katrina. It’s the first hurricane in my lifetime to have struck Mississippi and it had such an impact on so many people. I felt that impact and those emotions drove me through the writing of RIVERS.

In Rivers, Cohen recalls a vacation he and his wife took to Venice.  It’s so interesting that they vacationed in the “floating city” given that New Orleans features so prominently in your story.  The low elevation of New Orleans means it’s like a bowl and this means it’s vulnerable to flooding.  Is there a reason why you had Cohen and Elisa tour Venice?

It started as a way to give some more information about Cohen and Elisa and their life before, so I sent them to Venice on a vacation for the sheer irony of the water. It was only about 4 pages, but my agent really liked it and suggested I write their entire trip. So I created about 20 pages of what their Venice experience was like and then sliced it up and put it here and there throughout RIVERS. It helped that I’ve been to Venice a few times and that is a place, much like New Orleans, with its own strange feeling. It’s so old, so beautiful and ancient one minute, then you turn a street and it’s decrepit and smelly. But it also has a haunting feel, and it seemed to be a good parallel to what was to come for Cohen and Elisa.

What kind of research did you do for Rivers?

None. I looked at a map once or twice to make sure I had the distance between places correct, but that’s it. I didn’t want to look at any footage of natural disasters or study hurricane patterns because I had a pretty strong vision of the place I was trying to create and I didn’t want it tainted.

Although this is speculative fiction, it is so powerful given our extreme weather this century.  If something similar happened in the United States, irrevocably altering the landscape of the Gulf South and the way we live, do you think things would progress as they do in Rivers?  Or would they be worse?

That’s a really good question and I’ve had this come up with other readers. About all I can say is I hope this isn’t a Gulf Coast that we ever see because there are many people in this world anxious to try and take advantage of calamity.

A great deal of loss permeates Rivers yet there is also a great deal of hope.  Was that an aim of yours when you set out to write the story?

I think almost every story has to be about hope in some way. The novels and stories that I love center around hope and survival, whether it be emotional, spiritual, physical, psychological, whatever. The late, great Barry Hannah said all stories have to be about life and death and hope is in the middle of life and death.

I love Barry Hannah, another fellow Mississippian.  Did you have an ending in mind when you began writing Rivers or did the conclusion come to you over time?

I never have an ending in mind until I get there. I think planning too far ahead robs my characters of free will and that’s the last thing I want to do.

So many favorites: Larry Brown, Daniel Woodrell, Cormac McCarthy, Harry Crews, Jean Rhys, Ernest Hemingway, Albert Camus, Carson McCullers, Truman Capote. Some of my favorite books are The Stranger, Joe, The Crossing, Death in Venice, Old Man and the Sea, Ballad of the Sad Café, Good Morning Midnight, Feast of Snakes, The Iliad, [and] No Country for Old Men.

What do you like to do when you aren’t writing?

I like to be outside, chasing around my daughters, cooking out in the backyard, playing guitar, tailgating.

Our home state has produced truly magnificent writers—William Faulkner, Eudora Welty, Richard Ford, and Jesmyn Ward—just to name a few.  How does it feel to join their illustrious ranks?

It feels pretty good. There are so many great writers from this state, writers that you read and admire and aspire to be like, and then when you finally find your name mentioned alongside them, it’s surreal and satisfying and humbling.

What do you hope readers take with them after reading Rivers?

I hope that readers travel the same journey as Cohen and the others. I hope they are emotionally spent, that they feel the struggle, that they hope, that it’s an adventure.

What’s next for you, Michael?  Are you working on anything new?

I’m working on something but as always, you just wait and see how it goes. I’m excited about working again. There’s been a lot lately to keep me away from the healthy exercise of writing fiction and I’m ready to be back to it more consistently.

Thanks so much, Michael, for a wonderful interview.  Good luck with the book!

Thanks to you and so glad for your enthusiasm for RIVERS.